Have you wondered what it would be like to fly? Do you want to know how to become a pilot?  Is flying for you?

Check out these pilots:

The world’s youngest  pilot, 9-year-old Isilay Davaz, from Turkey, proves you’re never too young to fly. She started flying before she could even see over the nose of the airplane. Many learn to fly before they learn to drive a car. And after the freeing experience of the unlimited skies, it’s hard to go back to being grounded.

First Officer Margaret Watt flies huge airbuses for a major airline. Coca-Cola pilot Cassandra Shelby flies corporate jets — she’s found her dream job. Being the Pilot In Command of an airplane is an amazing feeling. But what does it take to be a pilot? Do you have to be good at math?

Every year, thousands gather at the Women In Aviation International conference to help each other carve out careers in the sky. Many soloed the day they turned 16, and now they fly corporate, airline and fighter jets. Is it hard? How did they do it?

Captain Karen Kahn, a Continental Airlines pilot, learned to fly when she was a teenager. She took an introductory flight and loved it. “Like anything else, once you learn, it becomes easier and easier. You have good training. You just stick with it.” 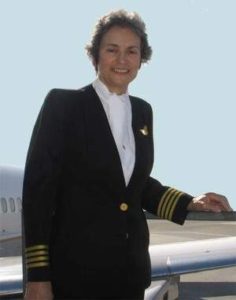 Karlene Petitt has been flying for a major airline for years, but when she was 9, she was told she couldn’t fly because she was a girl. She made the commitment at that point to become a pilot. “At 13, I took my first flight in a 727, and looked into the cockpit and thought, “I can’t do that!” But I swallowed that fear and doubt, and decided one step at a time. I took my intro flight at 16 and the moment we lifted into the sky I thought, ‘And they’re going to pay me to do this?’ I was hooked!”

Julie Boatman got her pilot’s license at 17 years old and has flown 60  types of planes. She became like a celebrity in her high school, admired because she could fly. “A whole world opens up,” Julie says. It’s an awesome experience that sets you apart from the pack, yet as Julie says, “it only takes average mental and physical skills.”

Margaret Watt agrees. “It’s not hard to fly.” She flies a huge Airbus 320 that weighs 172,000 pounds and has 150 seats for passengers. “It’s like driving a Greyhound bus. It’s a lot of aircraft to maneuver, just like a bus.”

But she learned step by step how to fly bigger and bigger airplanes. She compares it to learning to drive. “When you first get a driver’s license, it doesn’t just come in the mail,” Margaret says. “You’ve been watching your mom and dad drive, you study for it, and you take driver’s ed. You just don’t jump into a bus and start driving passengers. There is a lot of training that goes on before you carry passengers.” She learned to fly a small two-seater airplane first and then moved up to a four-seater and eventually to jets.

Meagan Varley flies fighter jets at 2,485 km per hour! Faster than the speed of sound. 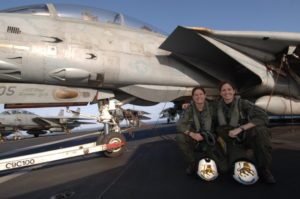 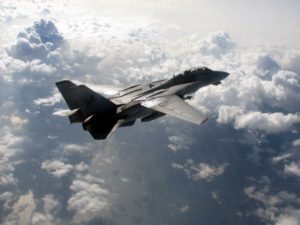 Meagan was the only female Tomcat F-14 pilot at the time when the aircraft retired. “If you have the motivation, the drive to do it, you can. There are things you can do to overcome obstacles. I come from a family with no flying or military experience. You can overcome anything holding you back.”

So what should you do if you want to fly?

Cassandra says, “A good first step is to go to your local airport and talk to the operators there. If there’s a flight school, visit them. There are always people hanging out at airports who can help you.”

Julie found a mentor at the airport who helped her learn to fly. “Hook up with somebody who can take you out to the airport and show you the possibilities,” she says. “Flying isn’t something you teach yourself to do. Flying really requires you to apply yourself and go through a course of study. Find the right flight instructor.” She worked with the Aircraft Owners and Pilots Association, which has a mentoring program to help student pilots get all the assistance they need.

Karen says you can prepare by “taking math and science courses to get comfortable with numbers. And get a mentor.” The Women In Aviation International conference is awesome for connecting with mentors. Every person shares information and helps each other out. EAA and The Ninety-Nines are other organizations that give out scholarships and assistance. Check out Girls With Wings, too!

In high school, Nicole Malachowski pursued her goal to be a U.S. Air Force fighter pilot. She soloed at sixteen and she became the first female Thunderbird F-16 pilot. “I’m just a girl with a dream who surrounded myself with positive people. If you don’t worry about labels and don’t worry about what people say you can or can’t do, I promise you’ll enjoy the ride.”

Major General Linda Hemminger of the U.S. Air Force has similar advice. “Set your goal and don’t let anyone tell you you can’t do it. Stay focused. And don’t self-eliminate by taking drugs or getting a DUI, and don’t be around negative people.” She sought out positive role models and started dreaming big for herself when she was a young girl. “If you don’t have a path, you won’t go anywhere. So make a flight plan for your life.”

She should know – she’s one of the highest ranking women in the U.S. Air Force. Whether or not you want to fly, it’s always good to aim high and see where it takes you.

You can check out my videos at YouTube, read about other pilots, find out more at Wanna Fly?

Copyright © 2017 FlyGirl™ and Life in the Skies™. All Rights Reserved.